Louis Pasteur (1822-1895) Helping the living through the infinitely small

The bicentenary of the microbiology pioneer’s birth has stirred the pens of wine advocates everywhere. In the midst of these necessary tributes to their figurehead, this contribution offers parallels between science and art in order to remind us that they form part of the same multidisciplinary whole, and that they share the same goals: to show the best facets of their fields. 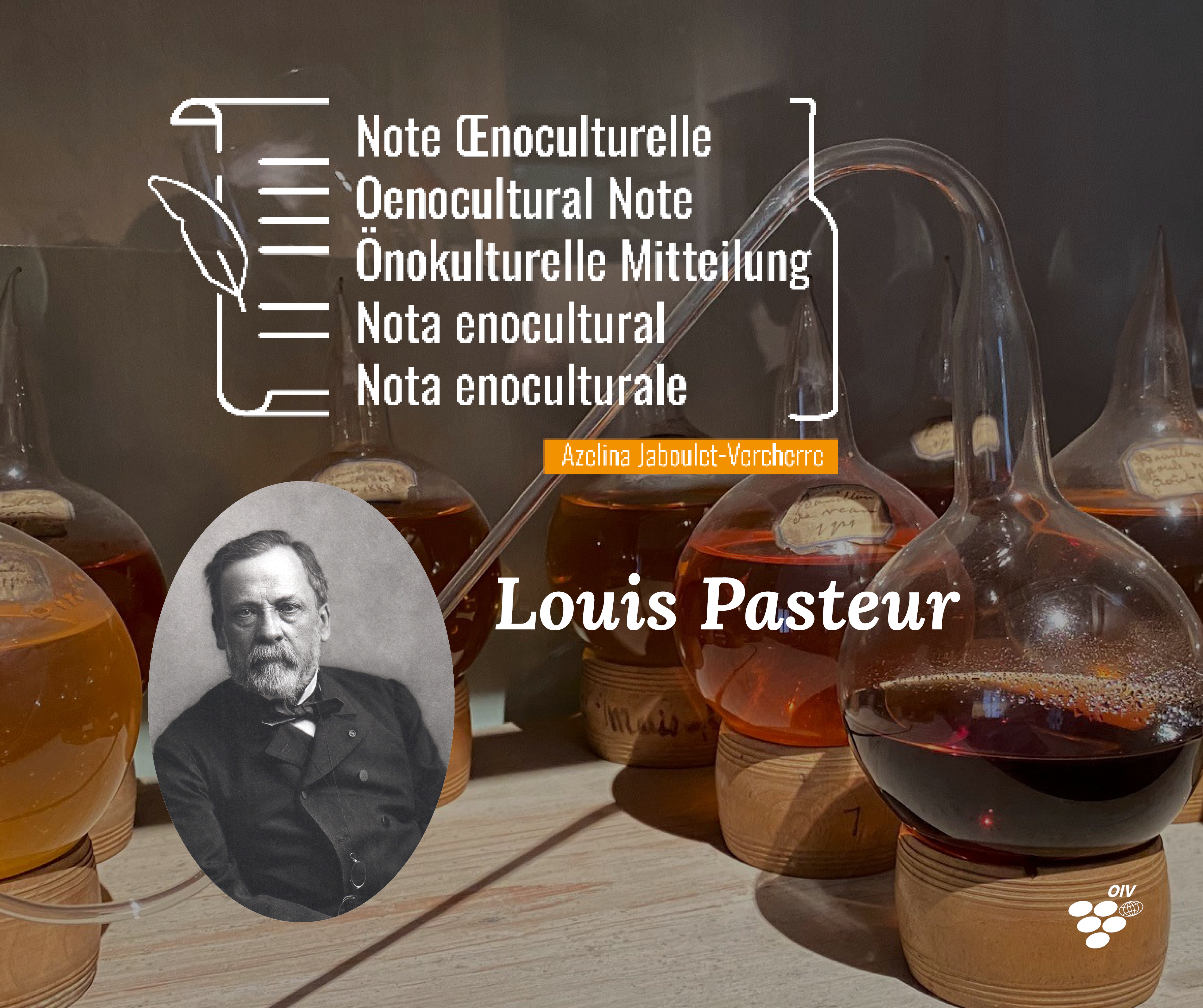 “Look up, learn beyond what you see, always go further,” Jean-Joseph Pasteur 1

As a chemist and biologist, Louis Pasteur raised microbiology to the rank of a science in its own right. He neglected neither institutional prestige nor honours, but he had a patriotic notion of commitment: more than personal glory, Pasteur sought to serve his country. He never disavowed the humility of his social origins, not even in his manners, which he kept simple despite his fame. Lulled by his father's motto: “Look up, learn beyond what you see, always go further,” the national hero always showed a particular enthusiasm for working for the ideas of science, faith, beauty, and country. He expressed this conviction, which was necessary for him to carry out his experiments, in his acceptance speech at the Académie Française on 27 April 1882:

The greatness of human actions is measured by the inspiration that gives rise to them. Happy is he who carries within him a God, and an ideal of beauty which he obeys: the ideal of art, the ideal of science, the ideal of the fatherland, the ideal of the virtues of the Gospel! These are the living sources of great thoughts and great actions. All are illuminated by the reflections of the infinite.

Between genius and chance discovery, we should not underestimate the importance of cleverly organised research that responds to societal demands, an era brimming with scientific advances, and the steadfast belief in progress.

Pasteur imposed the principle of order to that of the vagaries of research by maintaining a thread from the enunciation of the research question to its resolution through systematic experimentation, by focusing on the nature of relationships between organisms.

Like his predecessor at the Académie française, Emile Littré, Pasteur applied himself to the lofty matters of medical aetiology, what Littré called an “art of knowing.” Pasteur actually expressed his ideas through bold experimentation rather than through metaphysical speculation. His genius, according to Gaston Paris, his successor in Seat 17 of the ‘Immortals’ of the Academie Francaise, was to snub the pre-conceived limits of science. Why, indeed, should he deprive himself of tackling questions the complexity of which he knew he could overcome? In his case, scientific knowledge and method, the search for truth, and the capacity to see beyond the problem itself, would be unstoppable allies.2

Extract from the inauguration speech of the Pasteur Institute, 14 November 1888 in Paris.

A particularly exalted perspective allowed for Pasteur’s transformation from man of science to ‘benefactor of humanity’. Painting was his avocation; he was genuinely interested in art, drawing and painting in particular. This interest was expressed at an early age by a commitment to the art world. In addition to his own works (drawings, pastels, lithographs), produced before the age of 19, Pasteur taught the chemistry of pigments, varnishes and lacquers at the École des Beaux-Arts in Paris. He counted many artists among his close friends and was no stranger to the art scene of his time.3

Beyond the positivist impulse to apply his scientific expertise to something that he loved, researchers have recently noted a link between Pasteur's taste for art and his scientific flair in another way: he understood chirality (from the Greek χείρ, kheir: hand), the property of a three-dimensional object that is not, and cannot be made identical to its mirror image. Chirality links the notions of symmetry and orientation and is observed in many hard sciences, as well as in human hands. Having observed it in a lithograph, Pasteur applied the principle to biology: a fine illustration of the scientific utility of art.4

From wine doctor to the aetiology of its diseases

Pasteur is a key figure in the defence of wine, and the heir to a long line of gatekeepers of the therapeutic potential of wine, which were recognised since at least the time of Hippocrates, and advocated above all by Galenist physicians from the 3rd to the 17th century.

Amongst the countless scientific works on wine that have had a high impact, Pasteur's remain remarkable. From the 1860s onwards, he responded to the demands of Napoleon III with his studies on the wines of Arbois in the Jura region. He combined business with pleasure - or rather chemistry with empiricism - by acquiring his own vineyard (some believe he cultivated it with his own scholarly hands). But he is best known for his work on the sanitisation of wine by heating, which led to the destruction of the microorganisms responsible for acetification (Mycoderma aceti), since then known as ‘pasteurisation’.

True to his concerns for the betterment of humanity, Pasteur went beyond laboratory work by becoming an active member of the French Association Against the Abuse of Alcoholic Beverages. This was a disciplinary commitment, but also a moral one: the virtues of wine and man, he believed, could be expressed in harmony. Let us note this remarkable complementarity: through the search for remedies against human, animal and wine diseases, Pasteur came to an understanding of the dynamics of life in the microscopic world according to an Aristotelian philosophy. On the one hand it was teleological, and on the other hand, and above all, he understood growth and decay as inevitable for all living things.

In 2015, the Musée d'Art - Hôtel Sarret de Grozon, in Arbois, curated an exhibition on Pasteur using caricature drawings in a tradition that was both rebellious and historical. Five themes shed light on the main lines of the Jura scientist’s research and the context of his time: the figure of the scientist, rabies, the Franco-German rivalry, hygiene and society, science and religion. Beyond being provocative, this homage to the French scientist and spirit aimed to recall Louis Pasteur's winning triptych: iron will, phenomenal stamina, and the crowning success of constant and relentless effort. Pasteur was ultimately an international, multidisciplinary star for all of posterity to celebrate.

1These words were reported by Gaston Paris as being those of Louis Pasteur's father, Reception Speech, 28 January 1897, https://www.academie-francaise.fr/discours-de-reception-de-gaston-paris 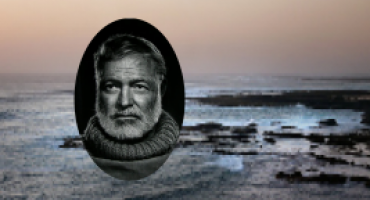 Hemingway's Messages in Bottles
Ernest Hemingway is one of America’s greatest writers. His masculine, muscular style, reflecting an eloquent and formal minimalism, as well as his prolificness, would justify his place in the literary pantheon. Beyond his work, his extraordinary personality has made him a legend – so much so that the importance of wine is overlooked in his writings. 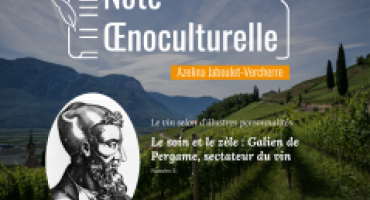 Care and zeal: Galen of Pergamum, wine devotee
Although he was not the first physician to praise the therapeutic uses of wine, he was unique in the meticulousness with which he described the specific qualities of a large number of wines. Such zeal undoubtedly makes him one of the first enlightened oenophiles in the history of thought 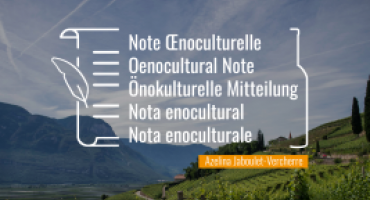 Hildegard of Bingen ‘Opening our eyes to Nature’: what can we learn from medieval natural philosophy?
Hildegard of Bingen (1098–1179) was an abbess, a woman of letters, a doctor, a prophetess and a musician. In her works, she expresses a sensitivity to natural rhythms, making her an exemplary leader for today’s followers of the biodynamic movement.