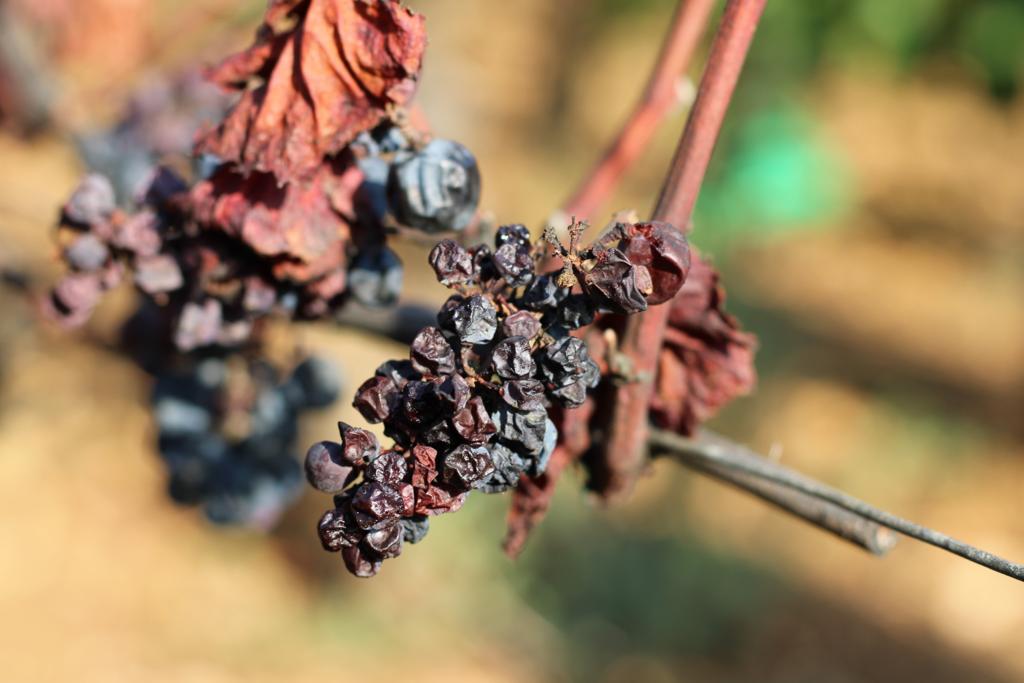 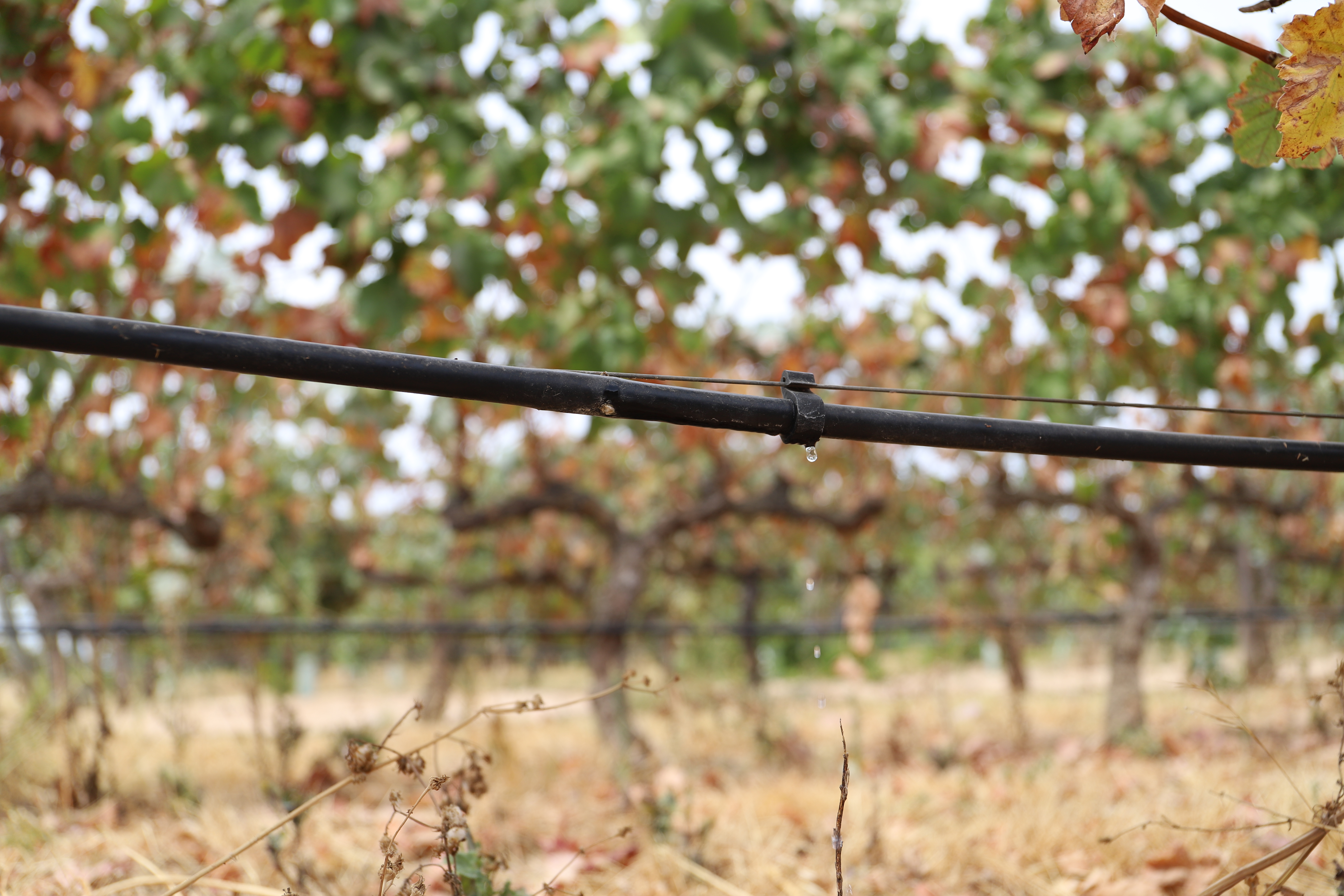 Working for a sustainable use of water in viticulture 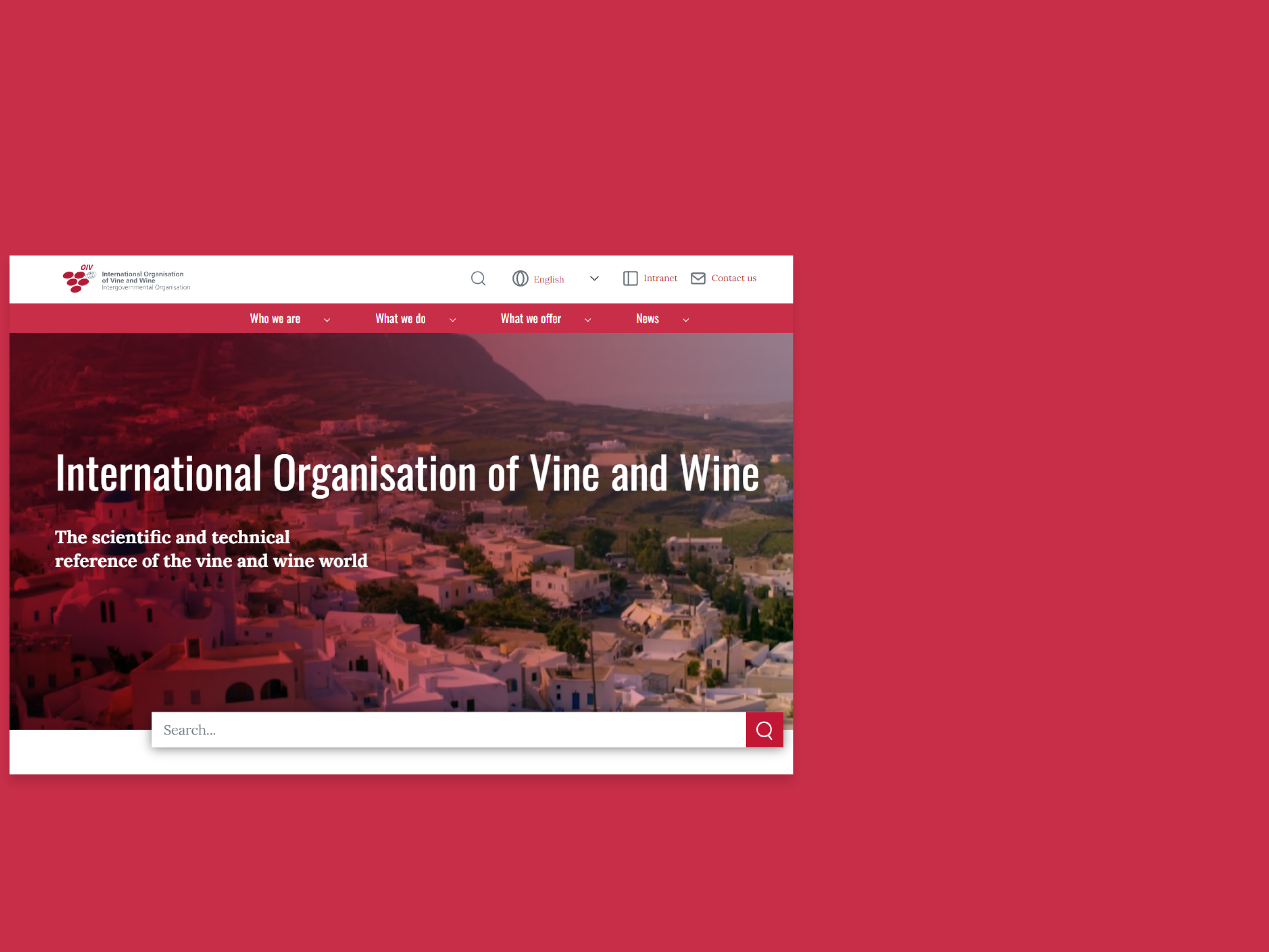 Welcome to the OIV’s new website. A tool to lead the digital transformation of the vine and wine sector 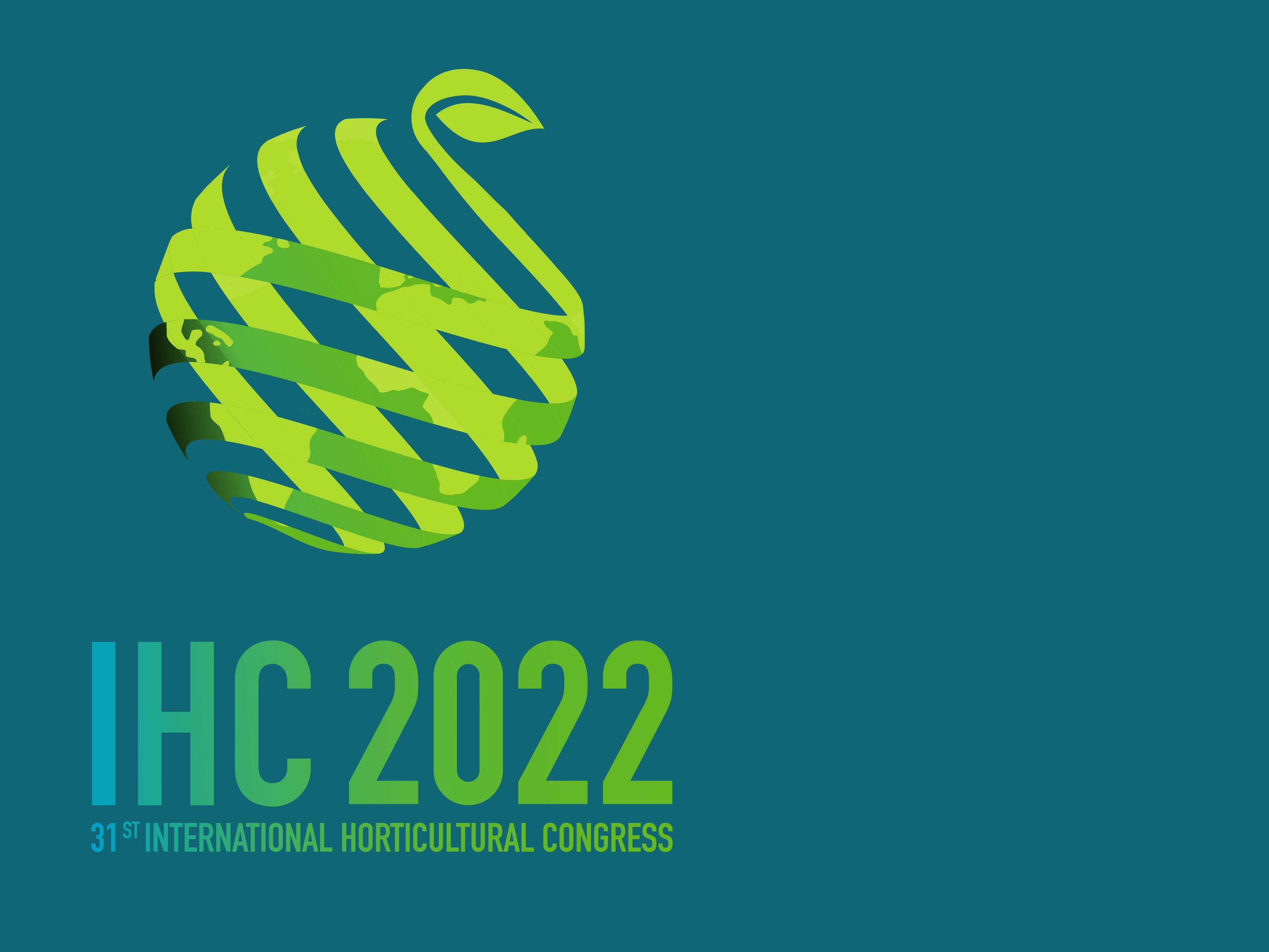 IHC: The vitivinicultural sector, which tools to face current challenges?

On 18 and 19 August 2022, the OIV hosted a symposium as part of the 31st International Horticultural Congress (IHC). 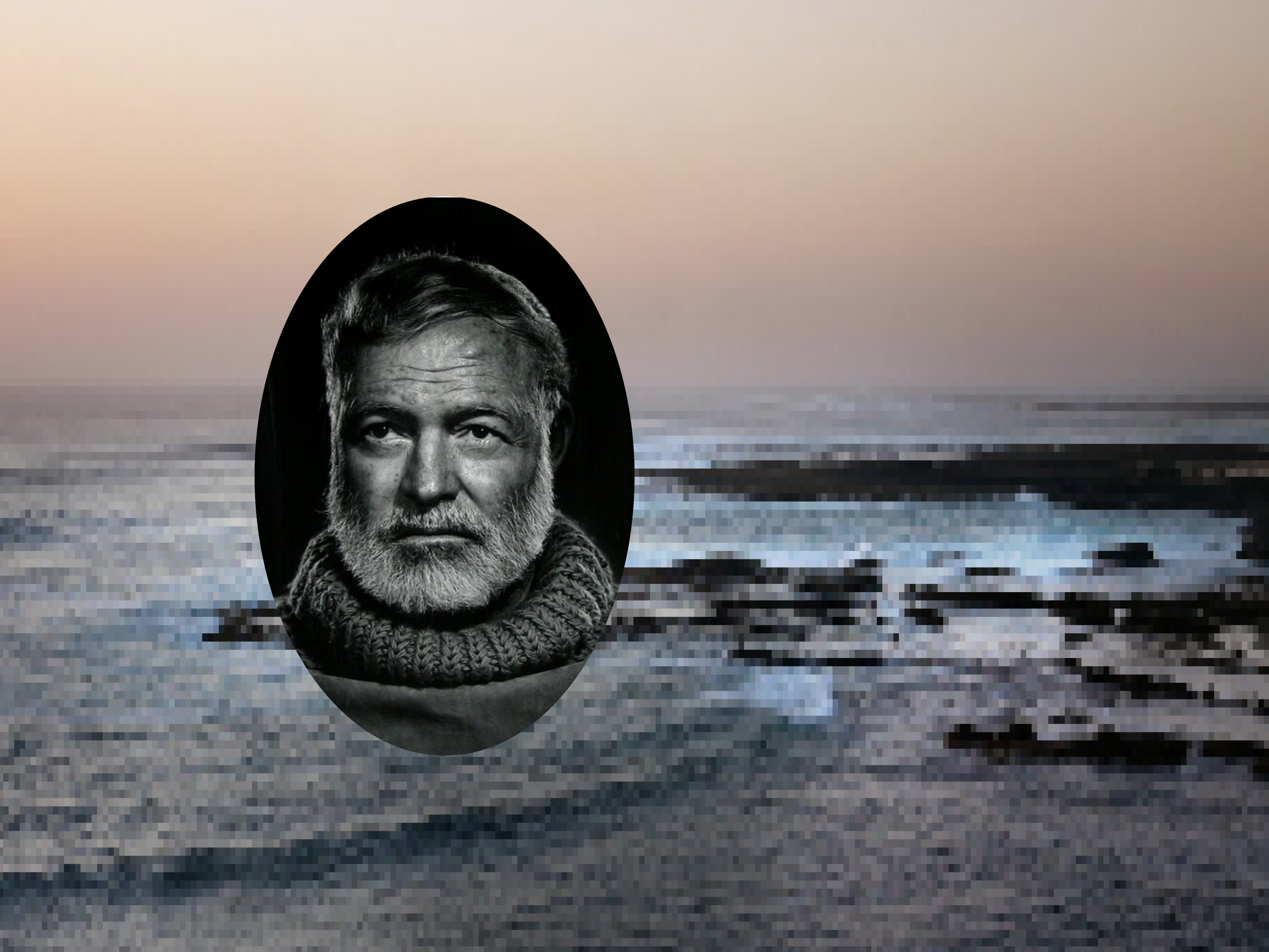 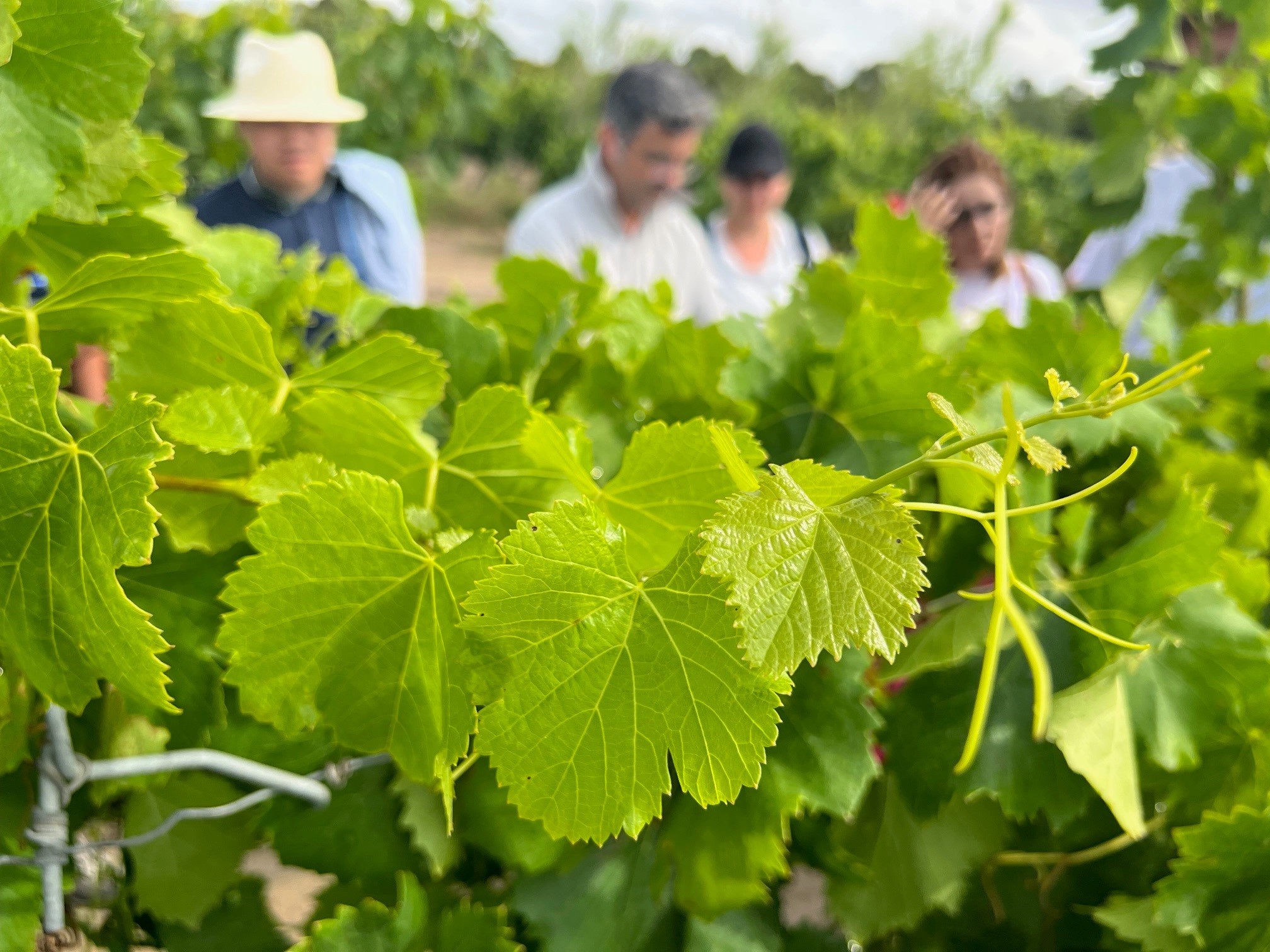 This ampelography course allowed participants to acquire in-depth knowledge in the identification and understanding of vine varieties, helping to better prepare them for future issues facing the vitivinicultural sector. The opening ceremony was attended by Pau Roca, Director General of the OIV, Carole Sinfort, Director of l'Institut Agro Montpellier, Sylvain Labbé, President of the Occitanie-Montpellier INRAE Centre, Laurent Audeguin from the French Wine and Vine Institute (IFV) and Laurent Torregrosa, Director of the Institute for Higher Education in Vine and Wine (IHEV). They represent the establishments with which the OIV has established partnerships for the purposes of conducting the course. The cradle of modern ampelography since the end of the 19th century, the Montpellier region has played a fundamental role in the promotion, conservation, study and research of vine varieties. Personalities such as Gustave Foex, Pierre Viala, Pierre Galet and Jean-Michel Boursiquot evoke tradition and innovation within the world vitivinicultural sector. These aspects of tradition and innovation have formed the basis of the programme for the ampelography course that the OIV has been running in partnership with l’Institut Agro Montpellier, the French Wine and Vine Institute (IFV) and the National Research Institute for Agriculture, Food and Environment (INRAE). Accompanied by internationally renowned professors, the 29 students of 15 nationalities had the privilege of visiting and working in three exceptional sites: the Pierre Galet experimental and teaching vineyard, the only artificial vineyard in the world dedicated to training and research; the INRAE Experimental Unit of Domaine de Vassal, the biggest ampelographic collection in the world with 8500 accessions originating from 50 different countries; and Domaine de l’Espiguette, a National Plant Material Centre and centre for vine selection where 4600 clones representing 600 varieties are cultivated. During the opening ceremony, tribute was paid to Jean-Michel Boursiquot, the former Vice-President of the OIV and Professor of Ampelography at l’Institut Agro Montpellier, who retired at the end of 2020. It was the moment for the OIV to commend this eminent figure and highly regarded professional, who contributed immensely to promoting this discipline and developing research in this field. In line with the Organisation’s scientific and technical objectives of international scope, the Director General of the OIV has already confirmed the organisation of the 3rd ampelography course for November 2023 in Chile.   Find out more... Ampelography has been an emblematic discipline of the l’Institut Agro Montpellier and INRAE in the Occitanie region for over 140 years. Its history over many decades has been marked by world-renowned specialists dedicated to research and viticulture. Veritable pioneers for their times and still today (Gustav Foex, Pierre Viala, Louis Ravaz, Jean Branas, Pierre Galet and Paul Truel, Jean Michel Boursiquot…), they have raised this discipline to a high level of international recognition in the vine and wine world. Encouraged by these leading researchers and professors in ampelography, exceptional varietal collections have been created and developed over the years with the support of scientific and technical teams from the Grande École l’Institut Agro Montpellier (formerly SupAgro) and the Occitanie INRAE centre. The Marselan is a cross between two grape varieties, Grenache and Cabernet-Sauvignon. It was first bred by Paul Truel in 1961. Now considered reference collections on a global level, the Vassal ampelographic collection at Marseillan-plage and the Pierre Galet experimental and teaching vineyard on the La Gaillarde campus in Montpellier comprise a diversity of vine varieties unique in the world. Thanks to the richness of these varietal collections and the expertise of the teacher-researchers who work collectively within mixed research units on the impacts of climate change on vine and wine, innovative, ampelographic-knowledge-based solutions have been tested to identify resistant varieties best adapted to climatic variations. 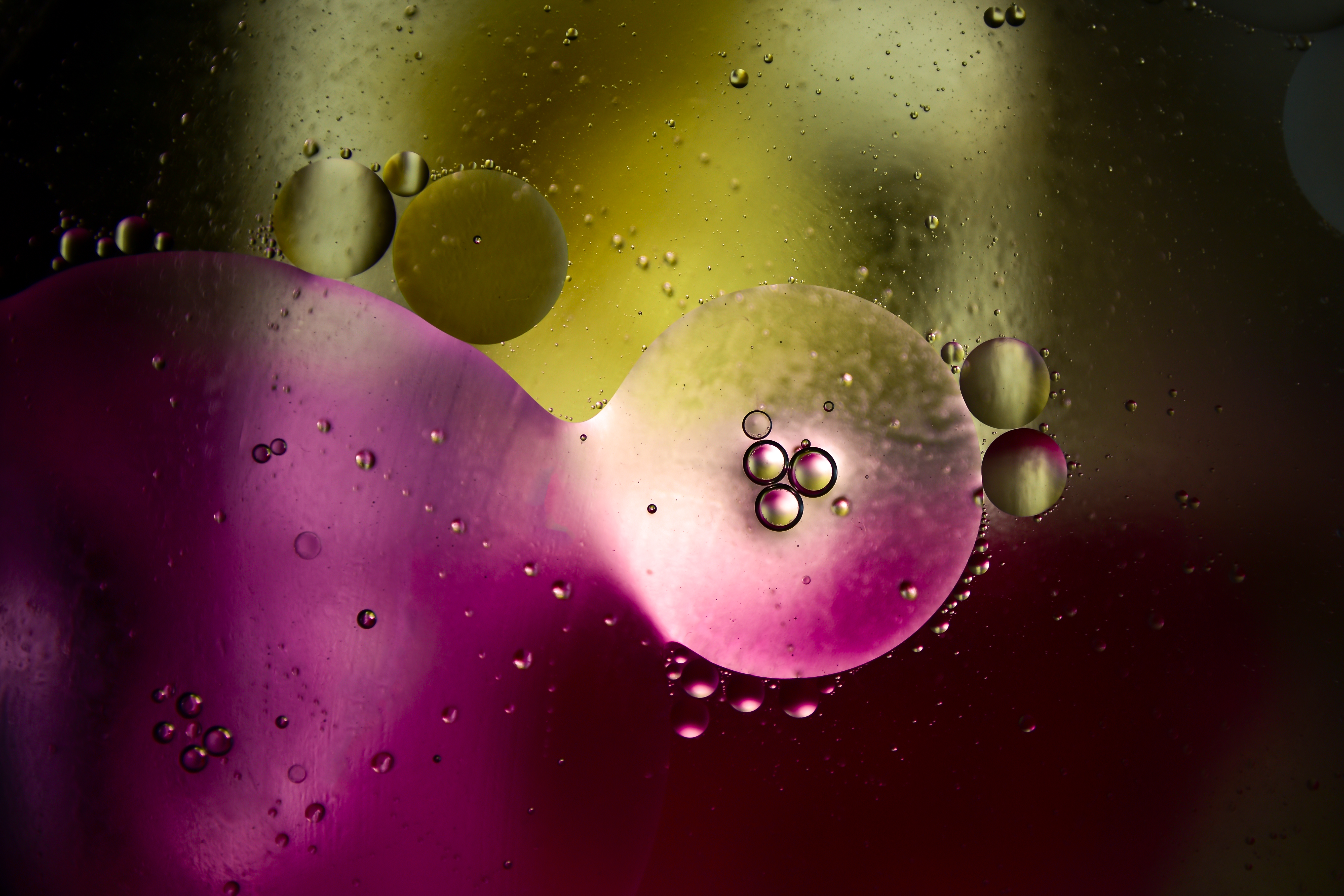 This year, the Consortium of international companies (Familia Torres from Spain, Moët & Hennessy from France, Sogrape from Portugal, Viña Concha y Toro from Chile and Yalumba Family Winemakers from Australia) is making an equivalent contribution to that determined by the OIV, which makes it possible to offer different types of research grants. Priority themes for 2022 research grants This year, special attention will be given to: 1. Conservation and Sustainable Management of Biodiversity and Ecosystems in Transitioning to a Nature-Positive Grape and Wine Value Chain 2. Sustainable management and adaptation to climate change. 3. Living and Healthy soils in viticulture More information here 2022 - OIV Research grant program in support of priority programme fields Application forms must be filled out and sent preferably by E-mail to job@oiv.int or by mail to OIV – Research grants – 12 Parvis de l'UNESCO – 21000 Dijon CEDEX, Deadline for submitting requests: 6 November 2022 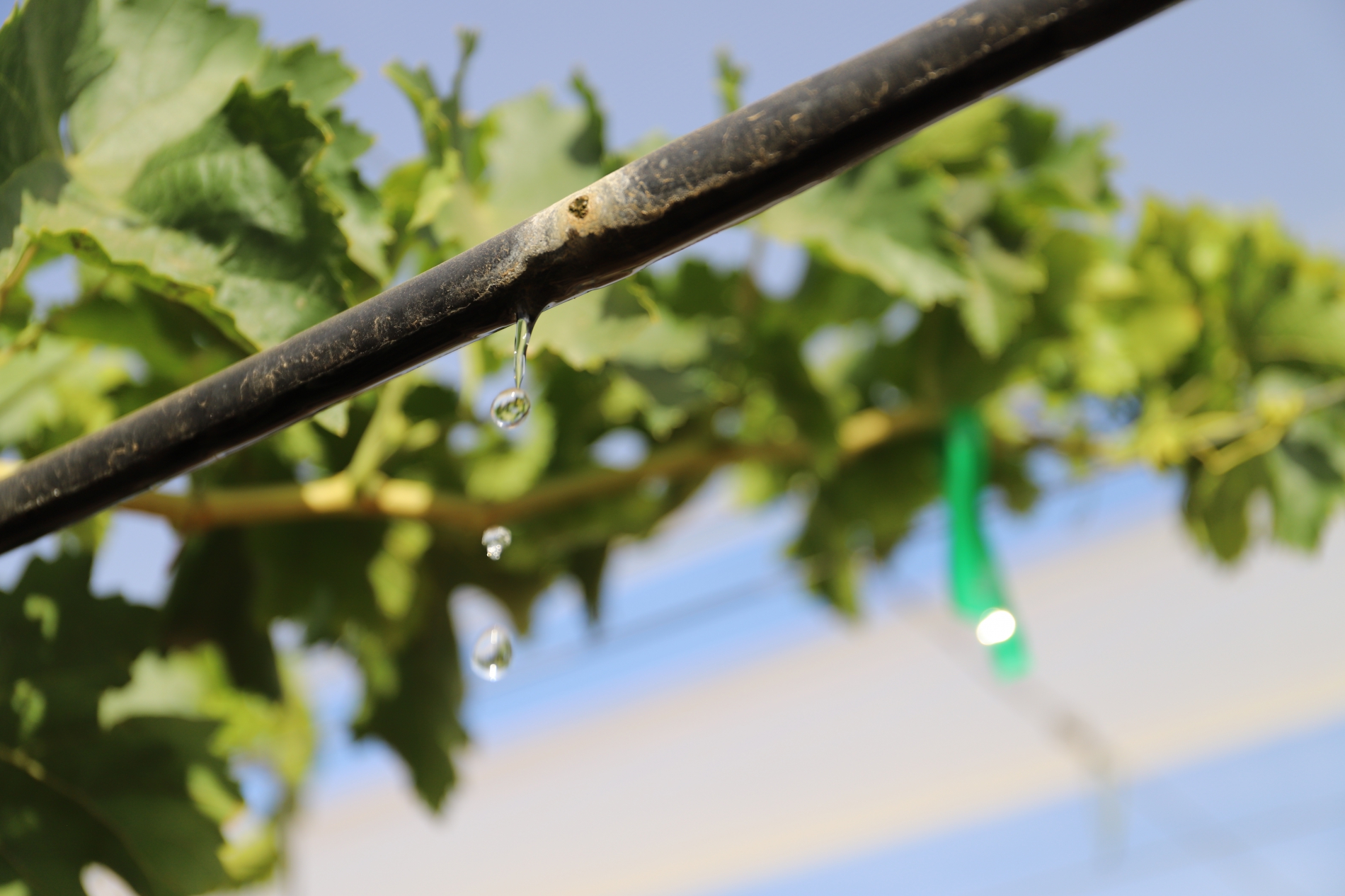 The use of water in the winemaking process; OIV reports

The OIV Scientific and Technical Committee (CST) of October 2019 endorses the incorporation of the study of the use of water in the wine making process as an issue into the OIV work programme. A Task Force on Water into Wine has been established to deal with scientific and technical issues related to the addition of water in the wine making process and Prof Monika Christmann has been designated as rapporteur.This document brings together in its first part, the history of the notifications sent to the WTO and the second part is devoted to the state of art of the various regulations in this area.Addition of water is generally allowed for technological requirements and in particular to incorporate any oenological substances permitted for use as a food additive or a processing aid.In addition, the different regulations do not specify a maximum percentage of water used for technological requirements.The members of the Task Force have studied the requirements of exogenous technological water for the dissolution of oenological products and winemaking practices.The lack of knowledge and transparency on the quantities of water added for oenological questions actually poses a problem of legal insecurity for operators in international transactions. It is important to make all decisions based on science and to not let governments play with this unknown situation.This report identifies three main areas of investigation for the OIV in relation to the issue of water in the wine making process.1.Methods of analysis2.Provision regarding water addition for specific Technical needs3.The impact of oenological practices 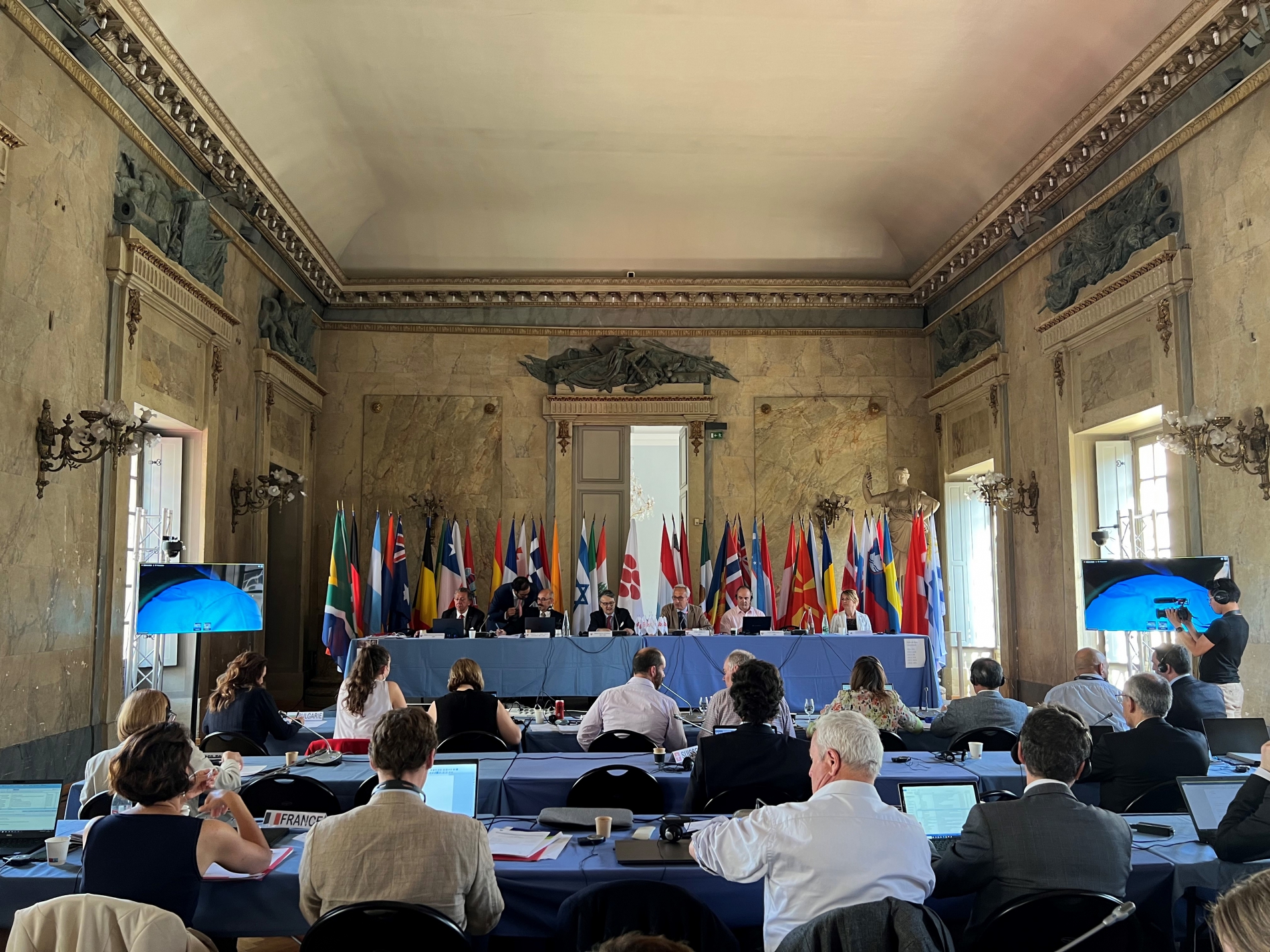 The State of Texas becomes a new OIV observer

First meetings in Dijon, new OIV headquartersThe GA launched the procedure of ratification of the changes in the Founding Agreement to include the transfer from Paris to Dijon. The Director General and the President informed the Assembly about the procedure that will install the new office of the Organisation provisionally in La Cité internationale de la Gastronomie et du Vin. Part of this recently inaugurated complex was proposed by the City Council of Dijon while the works to habilitate the future headquarters in the Hotel Bouchu d’Esterno are underway. The works are expected to take two years. Texas new observer The State of Texas was accepted as new OIV observer. By joining the organisation as observers, Texas aspires to enter into contact with the rich network of experts from all around the globe. “We come to the OIV to learn from the best practices and the experiences of great countries of the world of vine and wine. Texas has lots of ideas and initiatives to share with the world”, said the deputy commissioner of agriculture of Texas in his intervention, Jason Fearneyhough. As a proof, the State shares the challenges identified by the OIV in Climate Change and Digitalisation. “We want Texas to be inspired by the world, and the world to be inspired by what we do in Texas", he added. 43rd Congress of Vine and Wine in Mexico After two years of pandemic and without having celebrated the respective congresses, Mexico was granted the first and most important event of the Vitivinicultural sector in the world now that the most dangerous effects of the COVID-19 pandemic have diminished. Mexico was chosen by the OIV Member States for many reasons such as: The geographical representation and growing importance in the vine and wine sector due to the country's commitment to increase its wine production. The 43rd World Congress of Vine and Wine is committed to being an inclusive, safe and sustainable event. To this end, a Sustainability and Best Practices Committee has been appointed to intervene in the design, planning, organization, execution and evaluation of the Congress. Read the full press release

Have a look at our latest newsletter

Go to the last newsletter