Hildegard of Bingen (1098–1179) was an abbess, a woman of letters, a doctor, a prophetess and a musician. In her works, she expresses a sensitivity to natural rhythms, making her an exemplary leader for today’s followers of the biodynamic movement.

In the midst of this challenging vintage, we find ourselves searching for historical concepts that may allow us to counteract the turmoil of our time. The fields of agriculture, medicine and health are embracing a holistic understanding of the world, which in turn is reviving certain figures from our collective past.

The allegory of nature re-emerges in our minds, whether consciously or subconsciously, and transports us to the fantastical universe of a bygone era. Perhaps it is a medieval universe, like that of Bernardus Silvestris, who in his twelfth-century work Cosmographia shows Nature (Nature) to be governed by an even more powerful Mother Nature: Noÿs. As intellect, wisdom and Divine Providence, Noÿs dictates to Nature the course that must be followed to restore order out of macrocosmic chaos1. Together, these two superior natures would be capable of re-establishing harmony among all species.

Hildegard of Bingen, a ‘holistic’ spiritual ordering of knowledge

As we explore the perspective of days gone by, let us remain in the twelfth century, which witnessed a revival of naturalism2, with Hildegard of Bingen (1098–1179). Hildegard was an abbess, a woman of letters, a doctor, a prophetess and a musician. In her works, she expresses a sensitivity to natural rhythms, making her an exemplary leader for today’s followers of the biodynamic movement.

Her writings emphasise the close relationship between the internal movements of the body and Nature (life forces). This is especially true of her scientific work, Physica, alternatively titled Liber subtilitatum or Liber simplicis medicine (dating from around 1150)3. It presents an encyclopaedic inventory of Creation, covering cosmology, cosmography, people and their activities, such as planting vines and harvesting, diseases and their cures.

Although she often denied it, Hildegard knew her classics. There are many facets to her originality, including her demonstration that being a woman is no obstacle to receiving the recognition, and even the esteem, of the great and the good among her contemporaries (Bernard of Clairvaux; Pope Eugene III). She was then largely overlooked – as is often the case with exceptional minds – until October 7th, 20124, when she was declared a ‘Doctor of the Church’. But even more fundamental for us is her spiritual ordering of knowledge, which we would describe as ‘holistic’.

The Hildegardian view of Creation

In addition to her awareness of the earth as one of the four elements of the universe, she was interested in different types of soil and their uses5. Often ascribed to Hildegard, Causae et Curae (Causes and Cures) gives the measure of the medieval naturalistic approach, dominated by the role of the luminaries, the sun and the moon (‘mother of all time’)6. The author particularly insists on the influence of the moon on the cultivation of vines (planting, harvesting, vine quality, but also corruption of the fruit) and the notion of terroir (hierarchy of soils based on sunlight and humidity, choice of the grape according to the region where the vine grows):

"The trees that are in the eastern part and irrigated by the waters of the east grow well and give good fruit of various kinds, which taste good. […] The vines that grow there and are turned towards the east give a great quantity of wine of good quality. […]

[…] In the western part […] the wine is strong but not delicious, and it can be kept because the earth in this place contains heat and cold. […]

[...] Indeed, wine develops more from heat than from cold7."

The Hildegardian view of Creation is based on the reference system of the Book of Genesis:

"At the time of man’s creation, a particular earth was drawn from the earth: this was man. [...] And the earth provided its greenness, according to the species, nature, habits and environment8."

Creation is benevolent when we use it in a sustainable, healthy way

Beyond the interplay between the divine principle and the ordering of nature (physical and human), let us stress the mirror effect, a typically medieval topos arising from reflections on the cosmos. Humankind is compelled to be dependent upon a higher law, often at our expense. This call to humility brings us face to face with the force of nature, a force to which we must submit and from which we receive nourishment, rather than the other way around.

For the visionary abbess, the movements of the sun teach us a moral lesson:

"When, by his evil deeds, he [man] transgresses justice, he weighs down and darkens the sun and the moon, so that these, following man’s example, manifest themselves in storms, rains or droughts […]9."

"When the sun descends in winter, judgement fire inflicts its wrath through ice, frost and hail. By fire, by cold, by other afflictions, every sin thus incurs the punishment it deserves10."

These sentences could be interpreted as entreaties. The intention of the ‘Sibyl of the Rhine’, it would seem, is to remind us that Creation is benevolent when we use it in a sustainable, healthy way.

3 The title Physica was used from the Princeps edition on. For more information about the texts on which this study is based, see the work of Laurence Moulinier, in particular ‘La terre vue par Hildegarde de Bingen’ (March 2005), pp. 205–30. 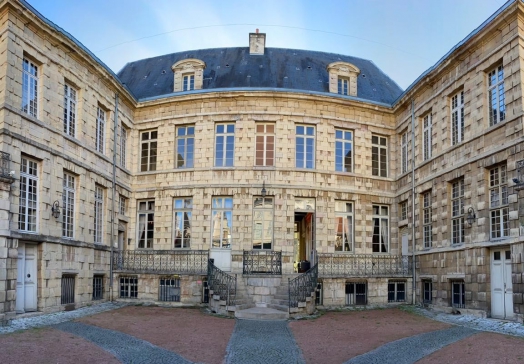 
The OIV has announced it will transfer its headquarters to Dijon, France